In Hans Einar’s quest to learn more about the American Indian heritage and my quest to visit with friends, our next stop took us to Hoopa (also written as Hupa) and the Hoopa Valley Tribe.  Rhoby, the sister of my good friend Kristy, has lived in Hoopa for nearly 40 years.  Knowing that she is deeply committed to the Hoopa Valley Tribe culture and traditions, I though it would be a great place for Hans Einar too.

We booked into the Tsewenaldin Inn, the only hotel on the reservation that sits close to the highway, conveniently located next to the Hoopa Tribal Museum and the Lucky Bear Casino.  We both had a déjà-vu feeling about the place and realised that it reminded us of hotels we had stayed in while we were “in the field” in Africa; a bit old, a bit worn, not everything working quite as it should, but, in the end, provided a comfortable and reasonably priced place to rest our weary bodies.

Rhoby invited us to her home for dinner where she welcomed us warmly with her husband Joe, Rhoby’s daughter Kazi and Kazi’s 6-month old son, Roscoe.  Also present were two dogs, “Puppy” (the big dog) and “Little Dog” (the not-as-big dog), and a cat who had no name.  The cat sat on the kitchen counter watching us as we ate, Puppy whined at Rhoby until she gave him some cat food (yes, cat food) and Little Dog showed up every now and then to get some attention.  We loved being in the midst of it all.

Rhoby is an artist.  She raises her own sheep, the Romeldale/CVM, an endangered breed known for their wool which has “next-to-the-skin” softness.  Rhoby hand spins the wool and is making the most beautiful sweaters, scarves and caps.  I felt, for the first time, freshly sheared wool still full of lanolin, and saw Rhoby spin the washed and naturally dried brown and white wool.  After trying on her favourite sweater, I vowed never to wear polyester again.  Rhoby is one of many Northern California tribal artists to be featured on the From the River Collective website.

Joe is the station manager for the community radio station, KIDE 91.3 FM.  KIDE describes itself as the first solar-powered community radio in California.  In the Hupa language, K’IDE is the word for an antler that is taken off a deer and used as a tool or decorated. The call letters were chosen by a fourth grade Hupa Language class in 1977.  One evening, as we were driving to a nearby town for dinner, we listened to KIDE. In the space of 40 minutes, we listened to a fabulous mix of Motown, Jazz and altogether groovy music and, although I had never associated Indian reservations with Marvin Gaye, Sly and the Family Stone and Janis Joplin, I do now.  It was some of the greatest mix of tunes I have heard in a long time.  In addition to playing great music, KIDE also supports Native culture and addresses native and tribal issues.  An example is the annual storytelling event YA’XOTCHI’XOLIK, the Hupa word for “People Telling Stories”, which KIDE sponsors.  Check out some of the KIDE podcasts to learn more.

Rhoby’s daughter Kazi is mother to Roscoe.  I won’t go on about how cute he is…you can see for yourselves in the photos below.  Kazi has recently moved back to Hoopa after living off the reservation for a number of years.  Roscoe’s father, Rene, works as a firefighter off the reservation.  Kazi told us that she came back because she wanted Roscoe to be raised in a real community.

Hans Einar and a happy Roscoe!

We spent a lovely evening with dinner made from fresh vegetables from Rhoby’s garden and talked about Indian history and culture.  We had a million question about Indian governance, land rights, culture and casinos.  The answers were surprising and did not always correspond with what I thought I knew…and I liked that!

The next day we decided to visit the Hoopa Tribal Museum, conveniently located (like just about everything else in Hoopa!) next to the Tsewenaldin Inn and the Lucky Bear Casino.  There we met Salis’ Chi Tawn (pronounced “Salish”) who let us explore the small museum ourselves, remaining available to answer questions.  Most of the museum’s artifacts are donated by local families and are removed for use during ceremonial events.  When we asked questions, Salish would often preface his responses with “I’m not an expert on that but…” followed by detailed answers.  We came to learn that Salish is the museum curator and is probably the expert on the Hoopa history and culture but that he practices a tradition of humility that prevents him from seeing himself as an expert in anything.

Salish is an engaging but low-key individual and we jumped at the chance for a guided tour of a traditional Hoopa village.  What was initially billed as a 1-hour tour  (we were the only ones on the tour) turned into almost 3 hours of total immersion in tribal history and traditions.  I don’t think that  Salis planned on spending such a long time with us but we had so many questions and he was so skilled and knowledgable that we just stayed with him until I think he ran out steam.  Hans Einar and I could have stayed for more.

Salis was skillful at blending storytelling with fact, past with present and entertainment with ceremony. To us, it seemed he speaks the Hupa language fluently (although he would humbly disagree), which is a feat since, according to the US Census, it is estimated that there are fewer than 10 individuals who could be called fluent and only about 50 people altogether who have “restricted control of traditional Hupa phonology, grammar and lexicon”.

Salis not only told us about the strong Hupa tradition of dance, he showed us one of the dances.  He also recounted a traditional legend from the village, noting that he was only allowed to tell a story if he knew it word-for-word in the Hupa language.  He then proceeded to tell us the story, switching effortlessly between English and his native language.  We both agreed that this was one of the best “museum tours” we had ever been on.

Salis showing us a traditional dance 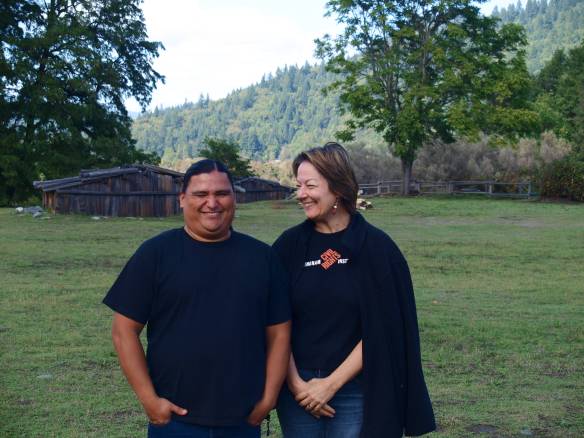 A final highlight of our short time in Hoopa were our visits to Joe’s Deli, the only food establishment in Hoopa that is reviewed on yelp.com.  Since breakfast was not included at the Inn, we decided to check out Joe’s, which I found after my usual painstaking research on local food places.  I love deli food and was excited at the prospect of a full deli-style breakfast, so we set off to Joe’s, conveniently located across the street from the Tsewenaldin Inn and the Lucky Bear Casino.

My hopes of a full deli-style breakfast were dashed the moment we walked in and saw long plastic tables, plastic chairs, a guy sitting in a corner playing a video game on his laptop and a few people behind a counter that seemed to have no kitchen.  We were offered flimsy paper menus at the counter and I ordered of a breakfast muffin with egg cheese and bacon.  Hans Einar began to order two scrambled eggs with bacon, only to be told by the woman taking our order that there were no scrambled eggs, only breakfast sandwiches with egg.  We were beginning to wonder what we had gotten ourselves into.  On ordering coffee, the woman motioned and said “coffee is over there”.  Expecting a plastic table with a few thermoses of old self-serve coffee, I was pleasantly surprised when we turned and saw a full barista setup with an extensive coffee menu and luscious baked goods.   The sign on the coffee machine gives a glimpse into the staff sense of humour at Joe’s:

Our orders were filled by two young guys and we sat down to await our sandwiches.  They arrived on red plastic trays in red plastic baskets wrapped in wax paper.  The breakfast sandwiches were delicious, the coffee was hot and strong and there was even free wifi.  We returned later that day for delicious clam chowder and nachos.