At a shrine:  Please keep off your shoes
At a hairdresser:  Ladies’ Saloon
At a restaurant:  Serving Multi-Ethnic Cushion

Some signs seem not to serve any purpose at all

As long as I cook Indian food, shopping is relatively easy.  The choice of dal (lentils) is virtually unlimited (I choose by colour) and don’t get me started on the types of rice available.  The problem comes when cooking other types of cushion.  Buying meat was a bit of a problem until I discovered Haroon’s.  Haroon’s is a meat store located in Mr. Haroon’s house.  Mr. Haroon is a Muslim so that’s where most expats head to buy beef (they go somewhere else to buy pork).   Rosie is the saleslady who pulls packages of frozen beef, chicken, lamb and, much to my surprise at Thanksgiving, turkeys, out of the huge deep freezers in the front room (the store).  As she does this, a very tiny and very shrivelled old lady sits guard at the front door.  I’ve never really found out who this lady is as she and I don’t speak the same language.  I speak English and she either meows or barks at me.  These utterances are followed by a toothless schoolgirl giggle (usually after the “meow”) or a menacing scowl (usually after the “bark”).   I sometimes wonder if she’s trying to tell me something as I walk out with unmarked packages of meat.

Shopping for meat is the easy part.  Shopping for the stuff that goes with the meat is another story altogether.  Bangalore is indeed an international city and the arrival of thousands of expats to the silicon valley of India has resulted in the availability of many foreign products in Bangalore’s food shops.  The only problem is that they are not all in one shop.  A recent shopping list comprised of bottled lemon juice, extra-virgin olive oil, lettuce, apples, whole-wheat bread and bacon involved 4 shops, 30 km and 2 days in heavy traffic.  The meal took 10 minutes to eat.

Preparing Fruits and Vegetables for Consumption

There are two schools of thought for expatriates on eating fruits and vegetables in India: one is the school that tells you not to eat them and the other is the school that tells you to eat them only if they are first soaked in chemicals to remove the chemicals used in their production.  It seems that India has not yet signed on to the International Treaty on Not Using Life-Threatening Pesticides that were Banned in North America and Europe Years Ago.  Before coming to India, I had read about the need to soak fruits and vegetables in potassium permanganate to remove pesticides but I wasn’t sure exactly what it was and was a bit worried about soaking things I would eventually eat in it.  A quick search on the internet reveals the following about potassium permanganate:

“Potassium permanganate, KMnO4, is a purple crystalline compound with a metallic sheen. It is soluble in water, in acetone and in methanol, but it is decomposed by ethanol.   It is prepared by fusing manganese dioxide with potassium hydroxide to form the potassium manganate and then electrolysing the manganate solution using iron electrodes at about 60 degC.  Potassium permanganate is widely used as a powerful oxidising agent, as a disinfectant in a variety of applications, and as an analytical oxidant reagent in redox titrations.”

I was reassured that the description did not include the words “lethal if swallowed” and further reassured when I discovered that the only place to buy it was at a pharmacy.  I bought 11 boxes, just in case I need to analyse a bunch of oxidant reagents in redox titrations.

When the colonisers arrived in India, they had trouble pronouncing some of the place names so, in the good old tradition of colonisation, they changed them.  The “decolonisation” of names started in 1995 when the Hindu nationalist Shiv Sena party came to power.  The ruling party of Bombay decided to change the name of their town to Mumbai, believed to be the original name of the settlement that became Bombay.  The state of Tamil Nadu changed Madras to Chennai.  Later, Cochin was changed to Kochi and Calcutta to Kolkata.  Tranquebar (a former Danish colony) became Tarangambadi, Benares became Varanasi and so on.  All of this makes for interesting stories of furious travellers insisting that they have been cheated because their tour guide took them to Varanasi when they paid to go to Benares.  Two of the more successful changes (i.e., names that are totally impossible for foreigners to pronounce) are Trivandrum reverting to Thiruvananthapuram and Ooty becoming Udhagamandalam.  It reminds me of learning Norwegian…

I recently returned from a one-week trip through Kerala, a state in India known for

Kerala is also known for the fact that, from 1957 to 1991 it was administered by a Marxist government and for its coconuts (no pun intended to the Marxists).

The capital, Cochin, is home to the exquisite Pardesi Synagogue, built in the 16th century.   The Jewish community in Cochin dates back to 175 BC, when it is believed that seven Jewish families settled after being shipwrecked off the Malabar coast.   Until 1948, when a large number of Jews left for Israel, there was a thriving Jewish community in Cochin, located mainly in the area called Jewtown.  Today, there are only 4 Jewish families left in Cochin.  When I visited the synagogue, a very Indian man asked me if I was Jewish and, when I said that I was, he said “Shalom”. 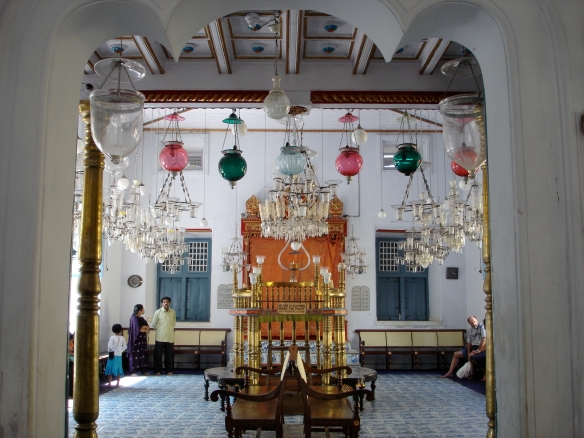 No trip to Kerala would be complete without a backwaters tour.  The overnight tour starts in Alappuzha/Allepey on traditional-style rice boats (kettuvalum).  I say traditional-style because some modern amenities have been added for tourists, including air conditioning, proper bedrooms and bathrooms and a kitchen.  A three-man crew catered to our every need, preparing delicious Keralan food loaded with chilis and coconut and even taught us to play Karam (a board game similar to billiards with flat round pieces that you flick with your finger).  As the boat meandered slowly through the narrow backwaters lined with coconut trees and rice fields, villagers went about their daily activities at the water’s edge.  It is difficult to describe the beauty of the landscape.  What I can tell you is that there is nothing quite like watching the sun setting slowly from a houseboat on the Kerala backwaters…